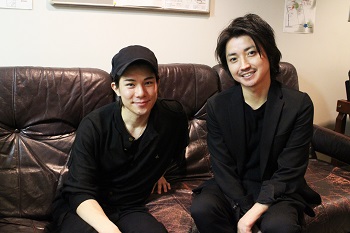 Q: You have both worked together in a movie?
Kakizawa: Yes, we were both in Kaiji 2.
Fujiwara: I have also watched Kakizawa in a number of musicals, including Frankenstein.
Kakizawa: Didn't you see Death Note?
Fujiwara: Unfortunately, I was too busy to see it live, but I just watched it broadcast on WOWOW.
Kakizawa: I definitely watched and referred to you in the movie version to play the musical role.

Q: What is Fujiwara like during rehearsals?
Kakizawa: His instantaneous power is amazing. Even if we have to change dialogue at the last minute, he adapts very quickly on the spot. I have never seen any other actor who can do that.
Fujiwara: (laughs) It's not good to improvise too much.
Kakizawa: While watching Fujiwara play Apemantus, I have truly learned a lot. I am five years younger than Fujiwara, but I do not think even in 5 years time I could do what he does. 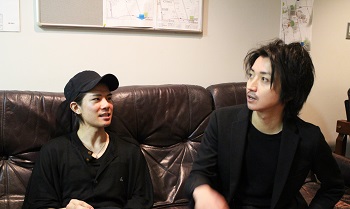 Q: How about Kakizawa?
Fujiwara: He plays a very difficult and stressful role very well. He has a powerful and strong voice. Whilst holding a hatred for Athens, there is a scene where he makes a speech, but it sounds just like a speech that could be made in modern day.

Q: When did Mr Fujiwara perform Shakespeare for the first time?
Fujiwara: It was when I was 20 years old.
Kakizawa: It was earlier, wasn't it?
Fujiwara: I was 20 when I performed Hamlet. When we did Julius Caesar, Yukio Ninagawa (who was directing) scolded me and said "Please forget everything I have taught you before now". I was so young when I first began theatre (15 years old), it was in my DNA, it was difficult to forget. But Shakespeare is different.